Found Studio explains the CG short film they created for the launch of VIZIO’s first OLED TV.
By Meleah Maynard

TVs have changed so much since they were first introduced in the late 1920s, it’s hard to see much of a resemblance. These days, OLED (organic light emitting diode) TVs are the cutting-edge choice for those who want superior picture quality, color and contrast. But all OLED TVs are not created equal. That’s why VIZIO worked with London-based Found studio for the launch of the brand’s first OLED TV earlier this year.

Together with VIZIO’s creative agency, PARTNER Found created The Wonder of OLED, a short film showcasing the new TV’s engineering and craftsmanship. Knowing the limits of live action, Found’s team used a combination of Cinema 4D, Houdini and Octane to create the film in CG, allowing them to visualize the TV’s capabilities in more captivating ways.

We talked with Found Creative Director Mike Sharpe and Art Director Ryan Locke about the making of the film, which includes a striking visualization of the pixel extrusion technology inside the OLED screen.

Tell us about Found and how you collaborated with PARTNER on this project.
Sharpe: We are a creative studio that combines 3D motion design and film craft. With a strong eye for design and visual storytelling, we produce bold, cinematic work for some of the world’s leading brands and agencies. This is our second job with VIZIO, and we worked really closely with their creative agency, PARTNER, on this film. They are a dream client who comes with really well-conceived ideas, and lots of great art direction references. But they also allow enough room for creative development and they trust their collaborators to expand on the overall ideas.

The pixel extrusion scene, for example, was written into the script, but we had to conceive and design the execution, including how they would look, move and feel. We experimented with numerous approaches before landing on the final creative route.
The film was originally intended to be set in an art gallery, but during the design process we found ourselves shifting more towards the interiors of aspirational modern homes. 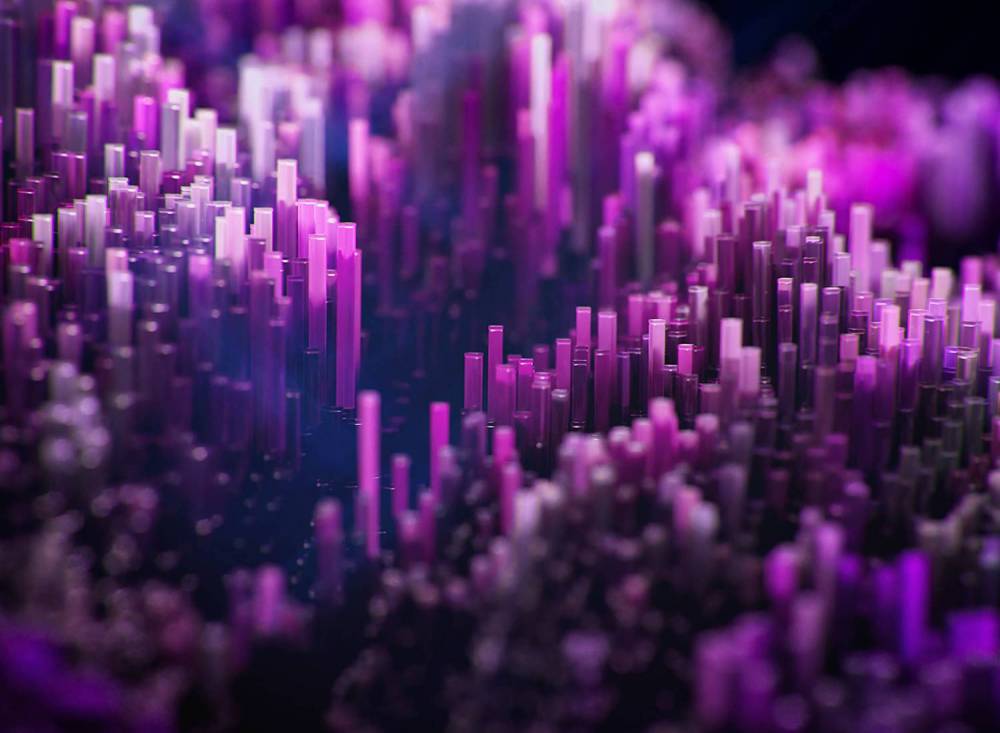 The short film offers a detailed view inside the TV’s pixel extrusion world.

At the same time, were were also working on a different film for Elevate, VIZIO’s new soundbar. The artistry and craftmanship of the products featured in both films deserved stunning settings to emphasize their style and quality, so the home setting won out over the stark gallery in the end. The biggest areas of creative exploration for us were the three on-screen artworks that are featured on the TV during the film. It was almost like a standalone brief, and we had a team of people exploring abstract ways to showcase color, contrast, and detail, which was a lot of fun.

Can you explain how you visualized some of the technology behind the new TV?
Locke: VIZIO’s OLED TV is a technical masterpiece of precision engineering, delivering superb picture quality with incredible detail and spectacular contrast, and vivid colors. It uses a new display technology called organic light-emitting diodes. In traditional LED displays, colors can be washed out, especially when viewed from an angle. The pixels in OLED TVs are capable of displaying absolute blacks, perfect whites, and precise colors that can shift from one extreme to another in a single frame. 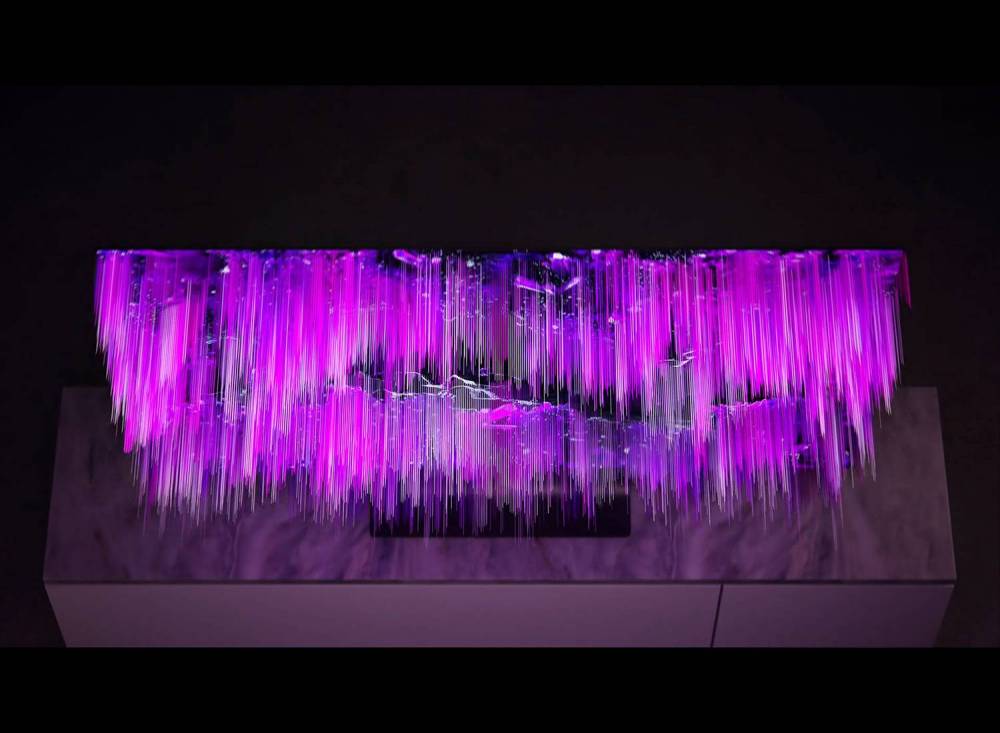 Found took the pixel extrusion concept a step further by imagining them as intricate rods protruding from the TV screen.

The pixel extrusion concept we came up with takes that technology and extrapolates it outwards. The image you would normally see on the TV is mapped across thousands of individual pixel rods. Each rod is at a different height depending on its color value and gamma level. And the rods move and shift as the content on the TV changes, creating a symphony of color-infused towers moving in rhythmic harmony.

Walk us through your pipeline for the film.
Sharpe: We mainly used C4D and Octane, but we also used Houdini to create some of the more organic/procedural elements, like the pixel extrusion scenes and the fine particle simulations in the sand swirls artwork that you see on screen. Like we do with most of our projects, we started by storyboarding the whole film based on the agency’s script. From there we created a basic greyscale previz.

But there were many different aspects to this piece, from product renders to architectural design and procedural animations, so we broke into smaller teams. While some people were looking at the lighting and modeling of the TV itself, others were working on look development for the environment. We also had a team exploring ideas for the on-screen artworks while others were concepting the pixel extrusion concept. 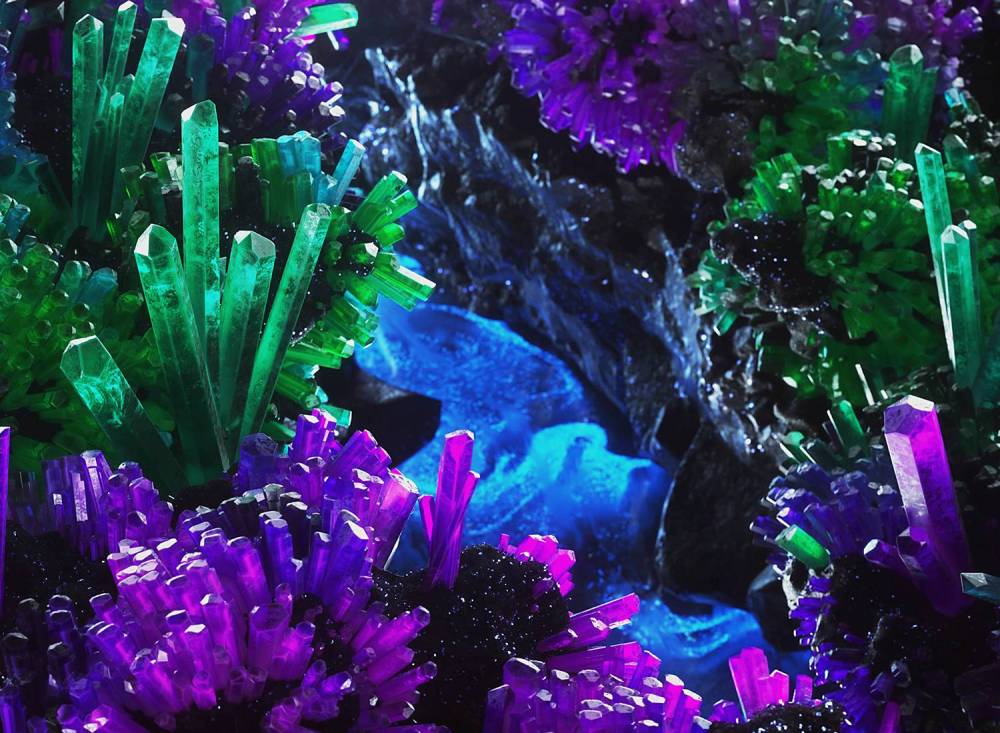 Artwork, like this crystal scene, appeared on screen at three points in the film in order to explore aspects of the TV’s technology in 3D.

Once the previz was signed off, we made a list of all the shots what was required and divided up the work based on each person’s skill set. It was a big team effort. We started full-color renders after the previz was locked and shared the previz with our audio guys, Echoic Audio, so they could start work on the music and sound effects. It’s essential to get some temporary music onto the film early, so we can check that the overall mood and pacing of the film feels right.

We had weekly reviews with the client until we get a picture lock. At that point, we rendered only the frames we need at full resolution and fidelity, with the final compositing happening in After Effects. As always, we then sent ungraded masters to a grading facility for final touches. In this case, we worked with the wonderful Thomas Mangham at The Mill. Finally, we lay back the master audio and added graphics, supers, and logos, and we were done!

The “electrowave” artwork on screen at the end of the film showcases the extreme viewing angle of the VIZIO OLED TV.

Was there anything new or interesting about this project that you can share?
Locke: Traditionally, when you are designing for screen, you don’t use primary colors or absolute blacks and whites as they’ll burn out onscreen. VIZIO wanted us to push the color values and gamma levels to the extreme because the final film would most likely be viewed on phones or laptops. We had to find a way to convey the vivid colors and extreme contrast of the OLED TV while still retaining precise image quality and clarity on a domestic device. It was an exciting challenge to see how far we could push things beyond the usual boundaries.

Meleah Maynard is a writer.