“Searching for meaning in your work is a massive mistake.”

We skyped with one of our oddest, most favorite and fun Forward speakers: Jim Stoten – and a few seagulls. The illustrator is based in a seaside town on the south coast of England and has worked for Süddeutsche Zeitung Magazin, Home Festival Venice, Land Rover Magazine, and many more.

In this interview, Jim tells us why he is not sharing any commissioned work anymore. He also shares insights from his education at Brighton University, learnings from exploring his work ethics after his studies, how he dealt with depression and setbacks, and what happiness truly means for him. Btw: He also has a band called Fruits! Meet him at Forward Festival Vienna in 2020 and secure your ticket. 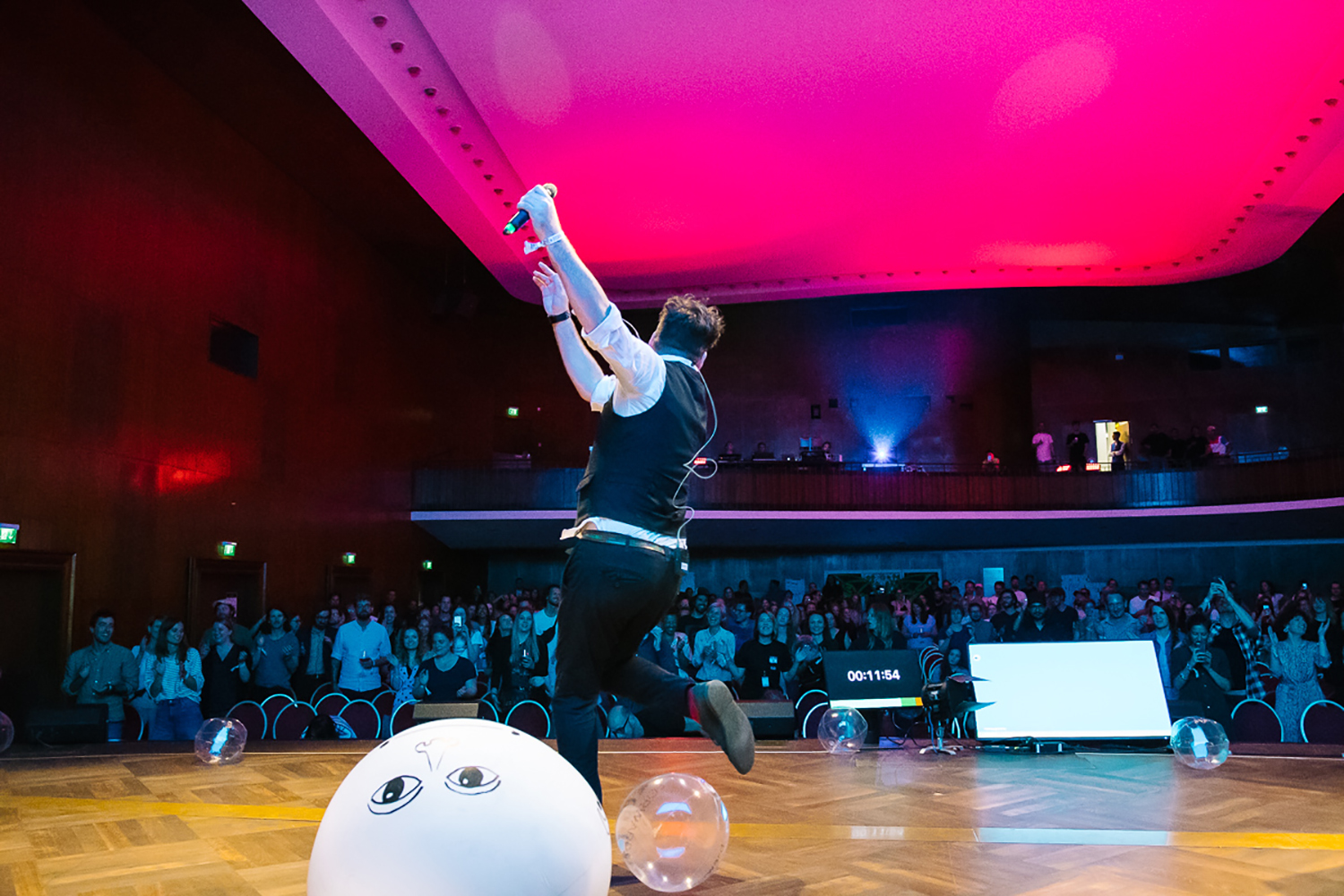 Forward Magazine: How did you find your path as an artist? What’s your story?

Jim Stoten: My story is still ongoing. I haven’t figured it out at all. I studied at Brighton University on the illustration course for three years. I made quite a lot of animations there and then came out of university and spent a year just panicking (laughing) and then I had to make money. So I started off doing work I thought people would want to see, so I could get jobs. I did that for about eight to ten years.

Forward Magazine: As a freelancer?

Jim Stoten: Yes, as a freelancer. I didn’t get a job at all, I just freelanced the whole time.

Forward Magazine: So right after your studies?

Jim Stoten: A lot of people that I studied with went into studio jobs so they had salaries which sounded really great to me but they weren’t being very creative. They were following instructions pretty much.

“It seemed like the more money made, the less creative you could be.”

So I decided not to do that. Which was quite useful because I made no money for maybe eight years but in my mind, that meant I was being very creative (laughing). I was sort of exploring but I wasn’t really doing what I wanted to do.

Forward Magazine: You didn’t like what you did or it wasn’t the right thing?

Jim Stoten: It just got very repetitive. So once I got one job, I got another job that was basically referencing the first job and so on. Everyone just kept asking for the same thing. And so I started doing personal projects – stuff I wasn’t being asked to make for jobs – and I decided not to share any commissioned work on the Internet so anything that I was getting for magazines and newspapers I shared neither on Instagram nor on my Website. I only shared my sketchbook, my personal work. And that seems to work really well because now the jobs that I’m getting reference that stuff rather than the jobs that I was told to do by someone else. 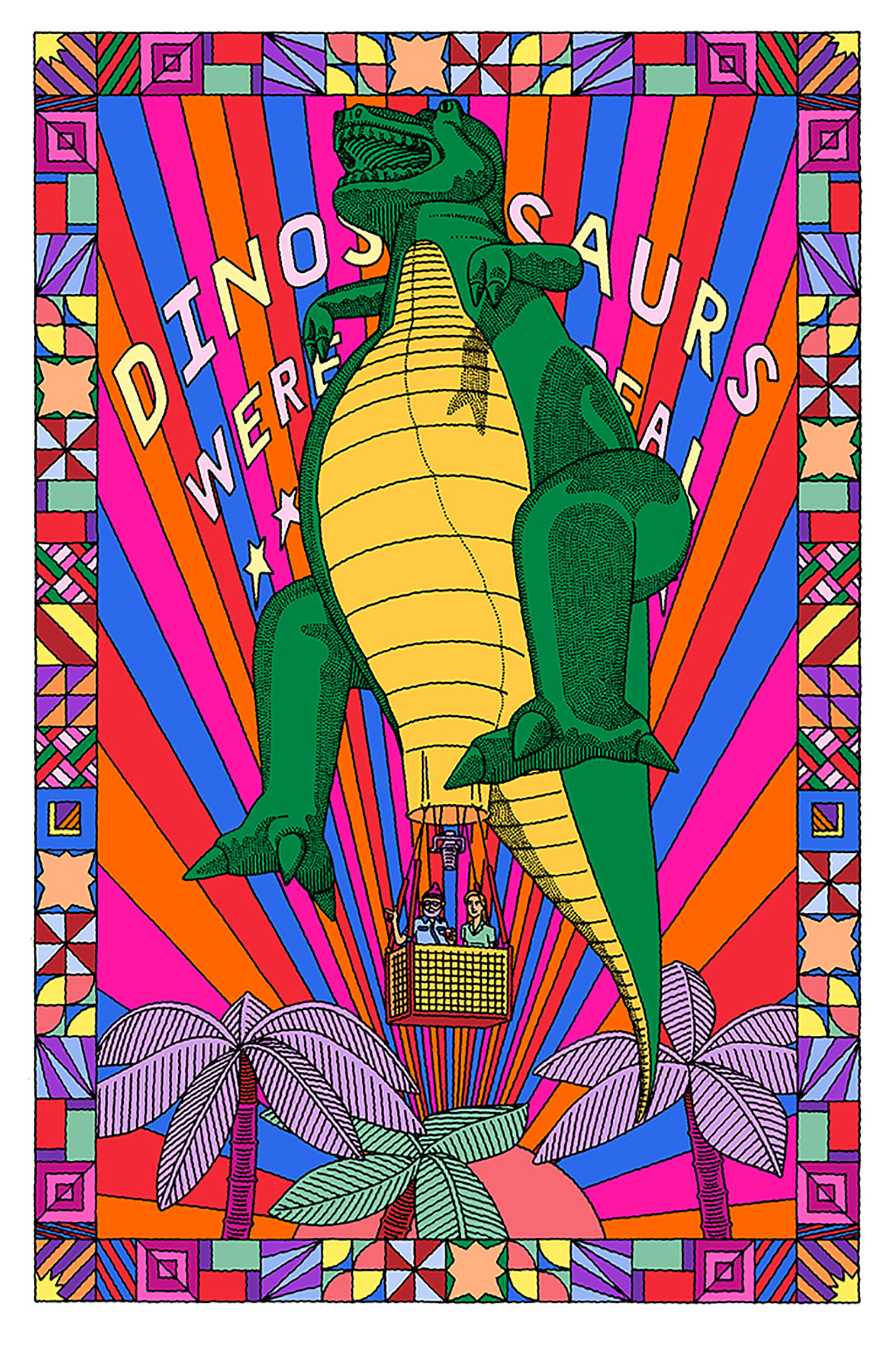 Forward Magazine: You said that you dealt with depression. What are your key learnings from that time?

Jim Stoten: The advice I would give to anyone who is suffering from depression is to take three steps back. I had a really good phrase recently:

“When in doubt zoom out.”

Take three steps back, regain perspective, adjust your sense of self-importance and the importance of your work. And then get going, having fun.
It should be more about staying sharp, staying open to inspiration from wherever it may come. And the concerns for the job part of your creative process should be very far down on the list of priorities.
Back then I had to take time away from my work which felt like the absolute worst thing to do. I felt like what I needed to do to combat my depression was to work harder. But I realized that was a mistake because the harder I work the more depressed I got. So I basically just gave up and just went to bed for a long time – about three months.

Forward Magazine: When did you find a new way, a fun way to work?

Jim Stoten: I basically didn’t draw. I felt like I needed to keep working but at the same time I didn’t have the energy to actually do it because any time I decided to – somewhere in my mind was the thought that there is just no point in doing another drawing cause it’s gonna be like all the others and that’s exactly the problem that I was in.

Forward Magazine: Do you have a favorite color?

Jim Stoten: Today it’s vibrant pink but tomorrow it’s something else I would imagine. 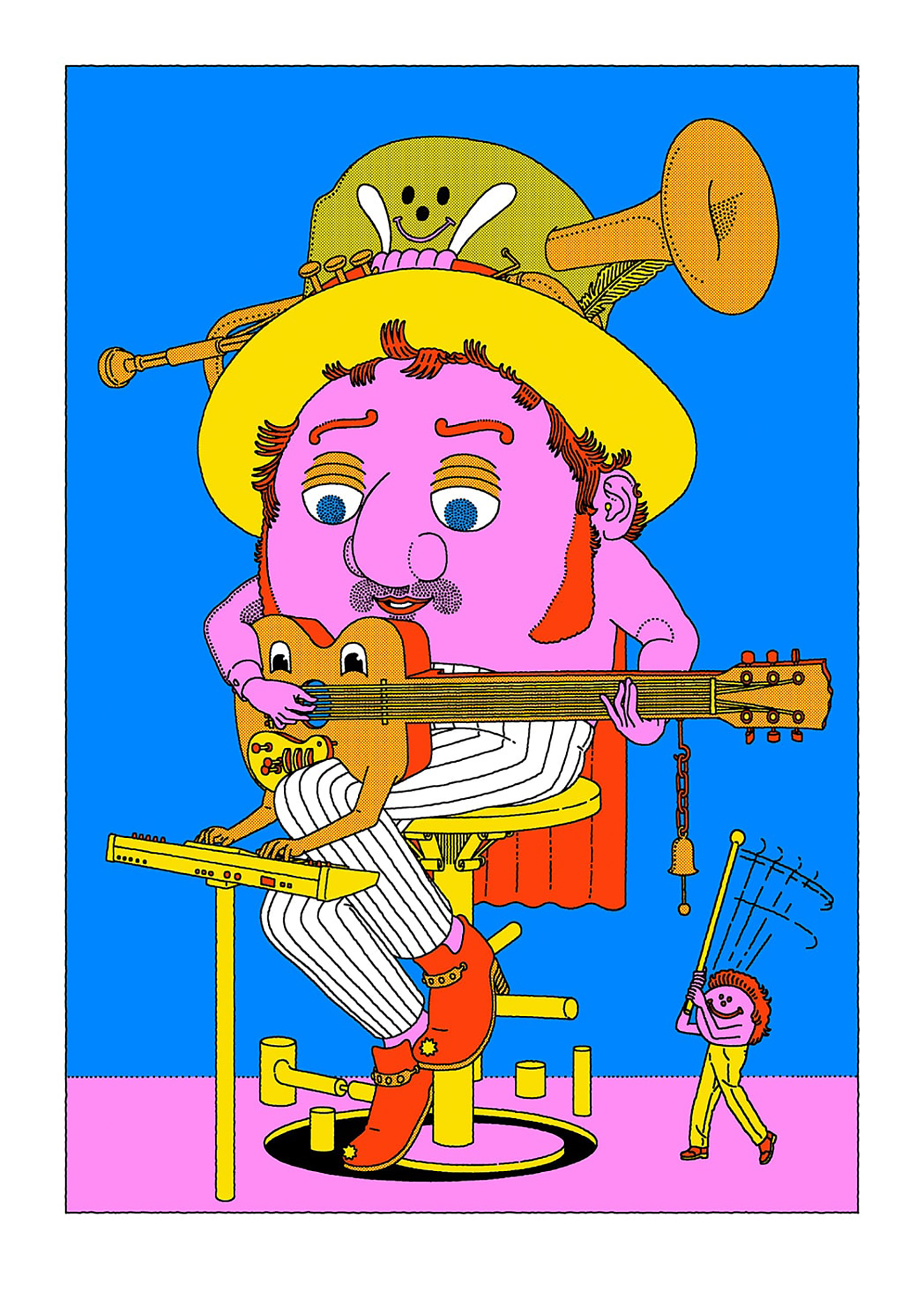 Forward Magazine: You said you’re known as the Yellow Submarine guy. Did you always use plenty of colors or has it evolved in the past years?

Jim Stoten: No, it’s always been like that. I get a lot of people asking me if I take drugs (laughing). I just haven’t. I think I just have a knack because I’m just drawing for me it is sort of meditative and really a way of just shutting down and just zoning in. Time can just fly by and it’s great!
It used to be frustrating to be so easily described I suppose. But now I take it as a compliment. The thing that made me so depressed was that in my mind,

“I was trying to do something which was just way too big.”

And that’s sort of what I meant about the self-importance thing. I attributed too much importance to my own creativity. And I’m still working on that because it’s so important to me. But if it’s too important to you then I think you can get caught up in your work meaning more than it actually does. Searching for meaning in your work, I think that’s a massive mistake. Artist Peter Blake, for example, never thought about it. If he wanted to paint a door, he painted a door, if he wanted to do a collage, he did a collage. He didn’t think any more than that. And that really changed things for me.
As someone who enjoys fine art myself, I love looking for meaning in other people’s work. But it was pivotal to me to understand that that wasn’t. That’s not what they’re doing. They’re not figuring out what their work means before they do their work.

Jim Stoten: It is just an act of creating something fun and then gets intellectualized afterward and I hadn’t realized that before. I thought it was the other way round.

Forward Magazine: What is your go-to activity when you feel a bad mood or depressive period is coming up if It’s still coming up?

Jim Stoten: I’m still working on that because my instinct is to work more. When I feel like I’m getting a bit bogged down in what I’m doing, feeling a little bit cloudy in my thinking, I try my best just to go for a walk, to a gallery, shopping for toys, making some music or just go for a drink with friends. I’m trying to break that routine of just continuing to work. That’s exactly what makes it worse. I imagine it’s the same for someone who’s addicted to heroin. Once you feel yourself coming off the heroin, even though you know the best thing to do is decide to ride it out. Your instinct is to just take more heroin which makes no sense. But in the short term, it makes total sense. In the long term, it makes no sense at all. And that’s an adjustment I’m still trying to make, to think long term rather than short term.

Forward Magazine: I think that’s the self-destructiveness of human beings. Even though you know it’s not good for you, you just do it anyway.

Jim Stoten: Because it will feel good for that moment. But then it’s probably going to be the thing that will make you feel bad for longer later. Very strange. 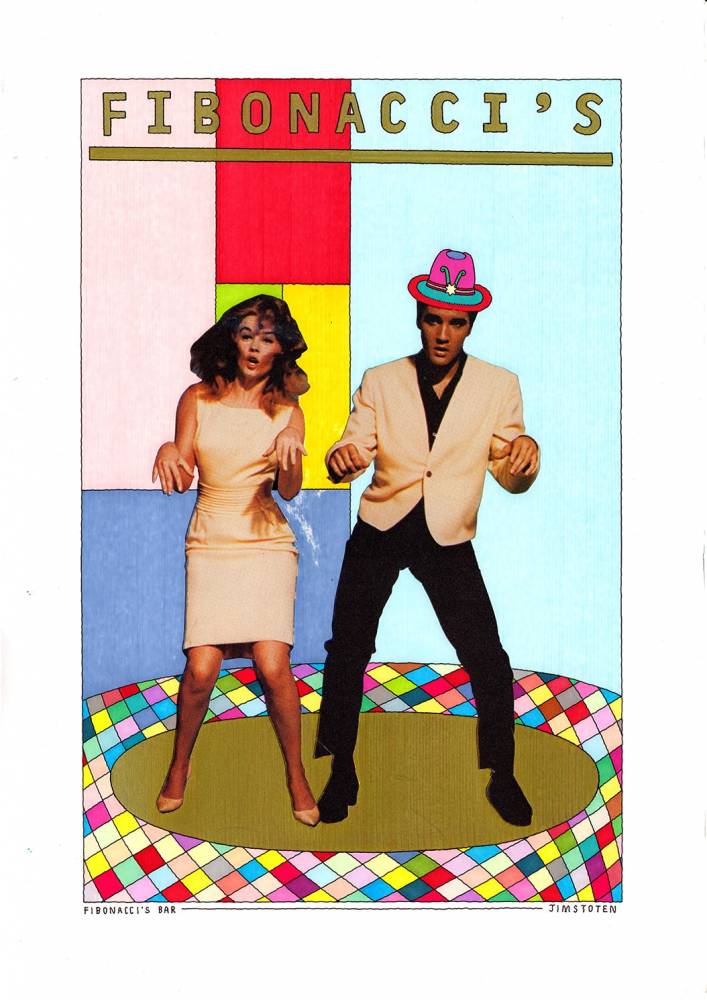 Forward Magazine: What is happiness for you?

Jim Stoten: It is something that when I feel it, I try desperately to maintain it. And then in the pursuit of doing that I cling on too hard to it and make myself feel sad.

“Happiness is a balance, unfortunately.”

It would be great if happiness was just a button you could press and just feel it all the time. But then, I suppose, you would get bored with it. So it’s fleeting. And when it comes, it’s amazing and when it’s not there, then you have to look forward to it.

Do you want to find out more about Jim Stoten? Secure your ticket for Forward Festival Vienna on October 7-8 2020.

& check out his Website and the fresh sounds of his band Fruits. 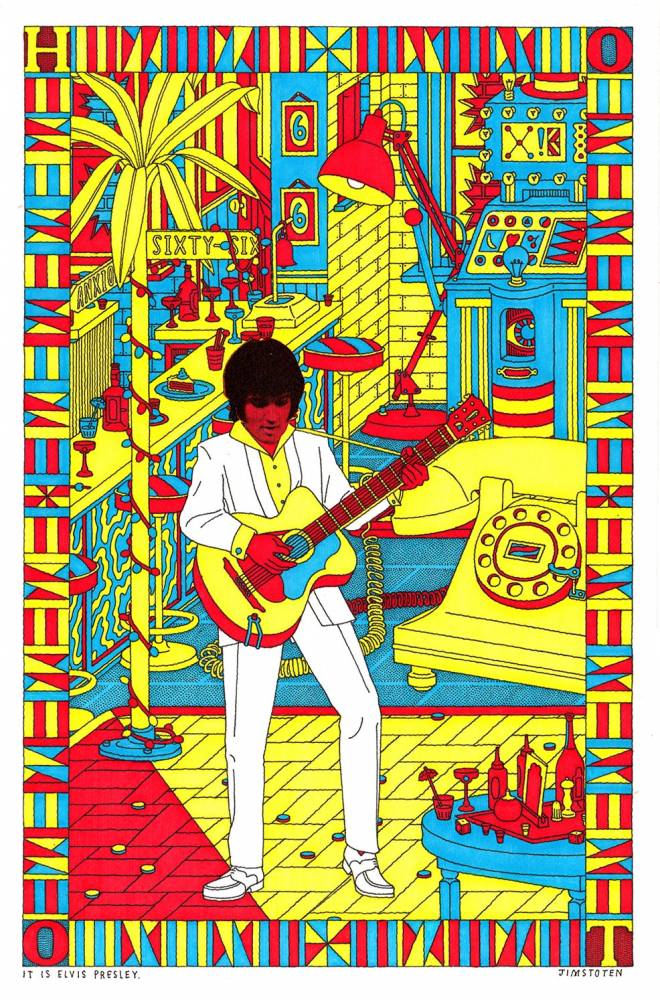 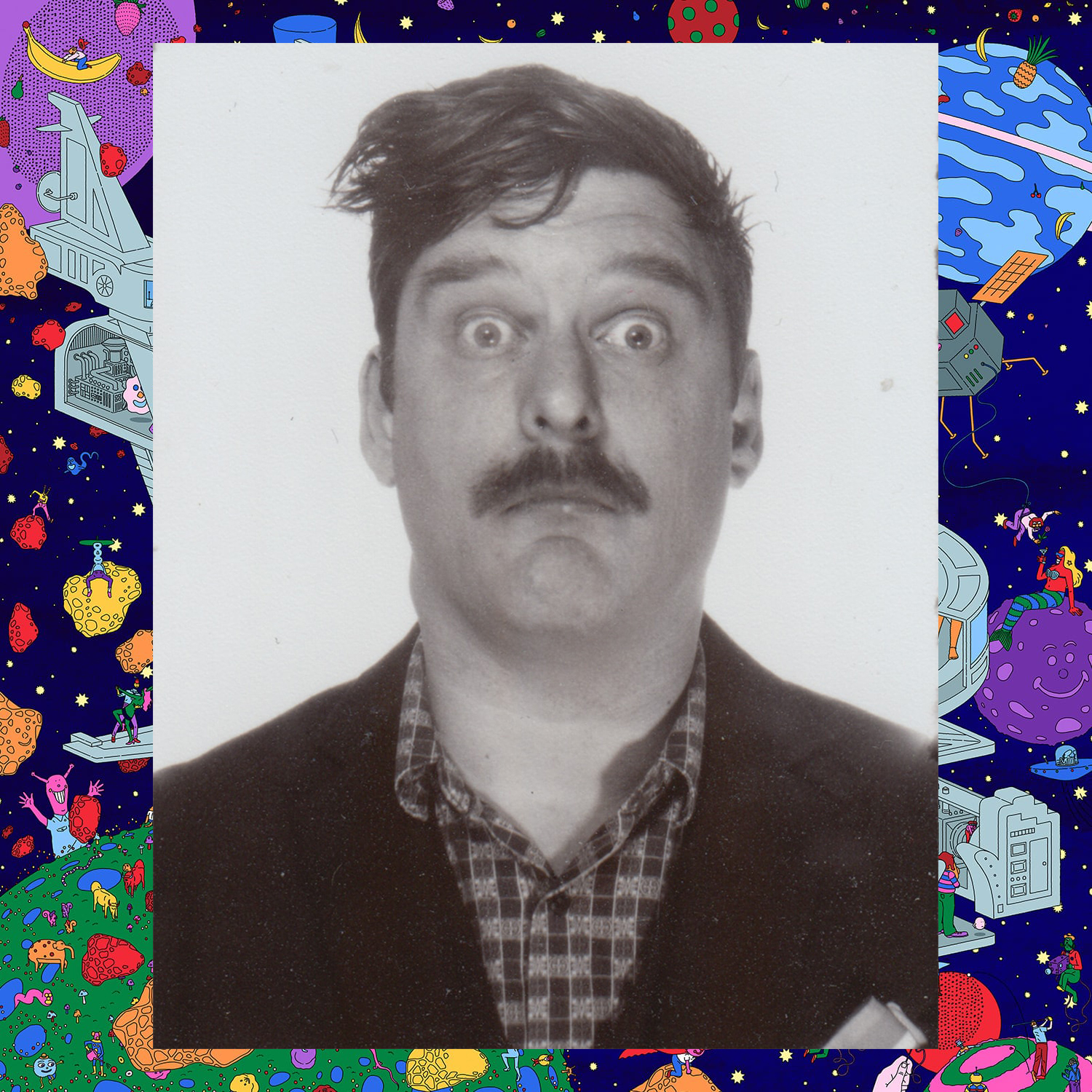