Lately we haven’t been able to get to work without noticing certain posters all over town. With the start of the new season at Burgtheater, quite a lot has changed; not only the program or the people working on it but also the entire look and feel.
Less of a fortress, more of a theatre, more inter-, less national. Artistic director Martin Kušej is on a mission to erase the term „Burg“ for Burgtheater – a vision that needed its visual identity to go along with.

We talked to studioVIE, the agency behind the rebranding, and apparently we weren’t the first ones contacting them about it. In fact, “never before in the history of studio VIE were people making the effort to look up our phone number to call us and complain about the new design.” Here’s why. 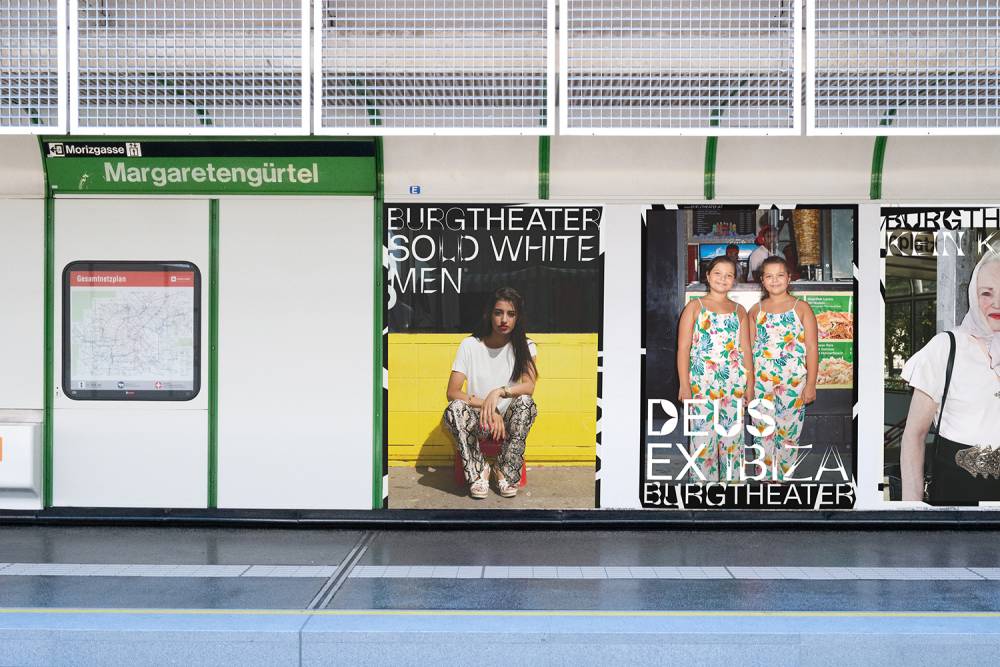 Forward Magazine: Did Burgtheater approach you or have you been wanting to work with them before?

studio VIE: When we founded studio VIE in 2013 we made a list of dream clients. You might see where this is going, because obviously Burgtheater was on that list. We were super psyched when they invited us to take part in their call for entries and even more when we won them as our clients.

Forward Magazine: Was the briefing very specific from the start or did you work out most of the idea together with Burgtheater?

studio VIE: In line with the new artistic positioning the design called for a bold statement. It had to be relentless on many different levels. Relentlessly pro-Europe, relentlessly unsettling, relentlessly demanding. Not pleasing in any way or pretty. Other than that there we were given total creative autonomy.

Forward Magazine: What was more important: creating something modern or something timeless?

studio VIE: The new visual identity of Burgtheater is definitely rather modern than timeless. At the same time we created something that won’t get old all too quick. Using a highly topical tool like the type generator created by font designer Elias Hanzer made the design modern. The way we utilize it for Burgtheater allows us all the flexibility it needs.

Forward Magazine: Thinking of rebranding, it must be tricky to distance oneself from the existing brand in order to create something new. How do you manage to do so?

studio VIE: While we have a lot of appreciation for the previous design by Raffinerie it was crucial not to create something too self-contained and accomplished but raw, open and rather unreliable. This goes hand in hand with Martin Kušej being on a mission to erase the term „Burg“ for Burgtheater because it’s associated with a fortress rather than a theater.

Forward Magazine: This was not the first cultural work you’ve done. What’s the difference when working for brands or for cultural institutions?

studio VIE: To us it’s such a privilege being able to work and exchange ideas with (most of the time) like-minded people. There is more affinity for risk taking and less attraction for pleasing ideas. Also, working for the cultural world we often don’t have to sacrifice aesthetic standards for user friendliness. Design is not seen as a tool to push sales as top priority. Our clients tend to have a more international perspective, which is really scarce with Austrian brands. We are here to boost Austrian design confidence and establish more awareness for sophisticated design.

Forward Magazine: What was the most challenging part of the project? Was there anything unexpected?

studio VIE: Burgtheater is a huge vessel. Many, many people are working very hard to get stuff done. Timings are often very tight and last minute. For example, the playbills go to press two days before the premiere because the photos are only taken at dress rehearsal. Or take bureaucracy, ideas don’t materialize because they have to be officially approved since it’s a state-run organization. Another obstacle is to be attractive for a younger audience while it’s the older generation who fills the seats every night. And finally, money. The budgets are shockingly tight for the number one flagship of Austria’s cultural institutions. 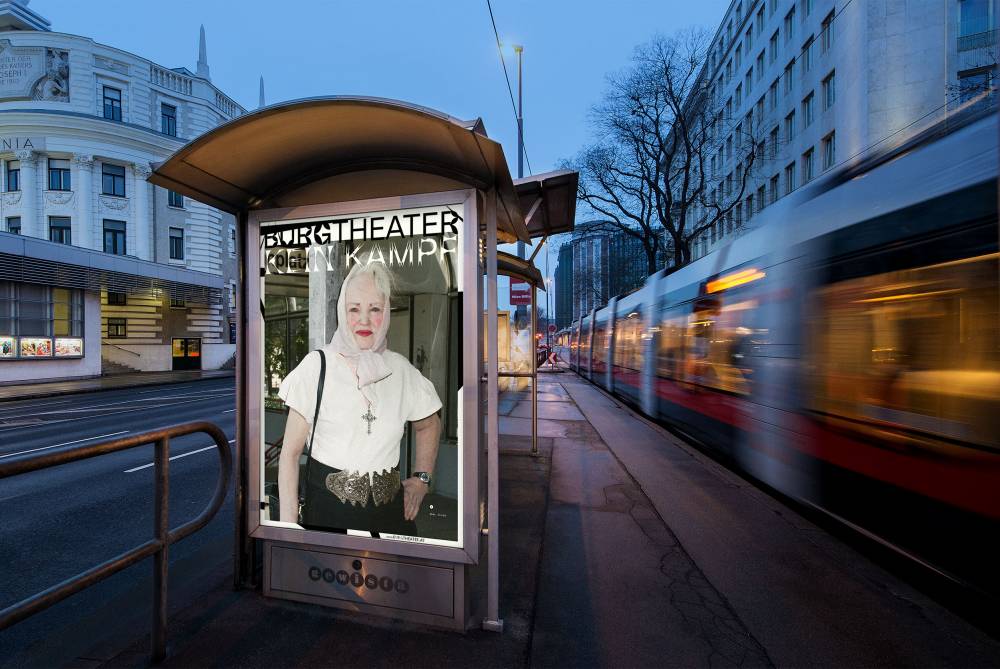 Forward Magazine: Stefanie Moshammer was in charge of the photography. Did you suggest to work with her on this campaign and if so, why?

studio VIE: Stefanie’s work was already familiar to the client. As we said it’s great to exchange ideas with like-minded souls. We just love Stefanie’s style, it’s edgy, immediate, Viennese, female, not adorned at any time but still so poetic.

Forward Magazine: “Deus Ex Ibiza”: Your posters do not lack boldness. Who came up with the idea? Were political statements part of the briefing?

studio VIE: We developed the concept of misheard and distorted truisms, platitudes and buzz words. The Ibiza footage instantly (and superficially) blew up our right wing government just like the plot device of Deus Ex Machina does in a movie or play. For us it was important to create a strong statement for uncertain political times. Kein Kampf sums it up quite well. 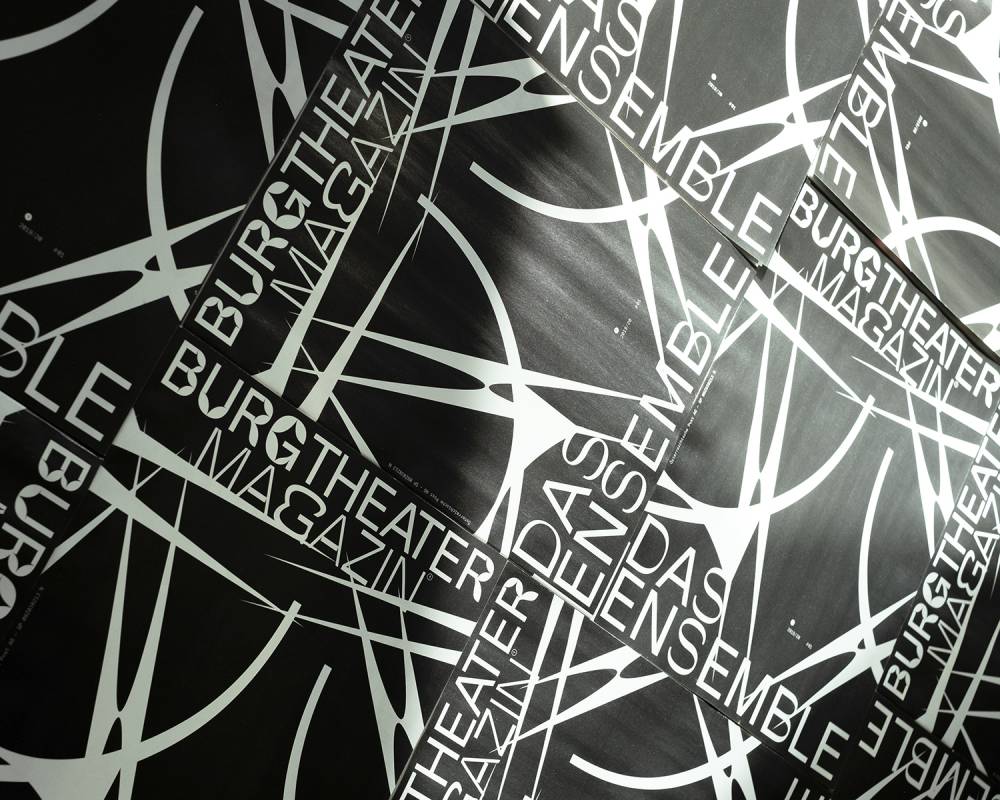 Forward Magazine: You worked with the digital agency SIRUP in Berlin, right? What was their role in the working process and how did the collaboration have an influence on the result?

studio VIE: The only thing we contributed to the website is creating a style guide, animation and defining typography hierarchies. Sirup was responsible for sitemap, UX/UI and how the website looks today. So we wouldn’t exactly call it a collaboration.

Forward Magazine: The new design is very modern after all. Were you afraid of the reactions of those fond of traditional Viennese culture?

studio VIE: So this was a whole new experience. Never before in the history of studio VIE were people making the effort to look up our phone number to call us and complain about the new design. Initially the briefing said, the best thing that could happen, is the audience talking about the design in the foyer. There is outrage and there is bewilderment. We are very aware that our design is not exactly a crowd pleaser. But we fully subscribe to the concept of panta rhei, change is so important. It’s only humane (and Viennese!) that regulars of Burgtheater feel like something old and treasured has been taken away from them, but we have very high expectations of their capabilities.

Thank you studio VIE for the interview and the images. 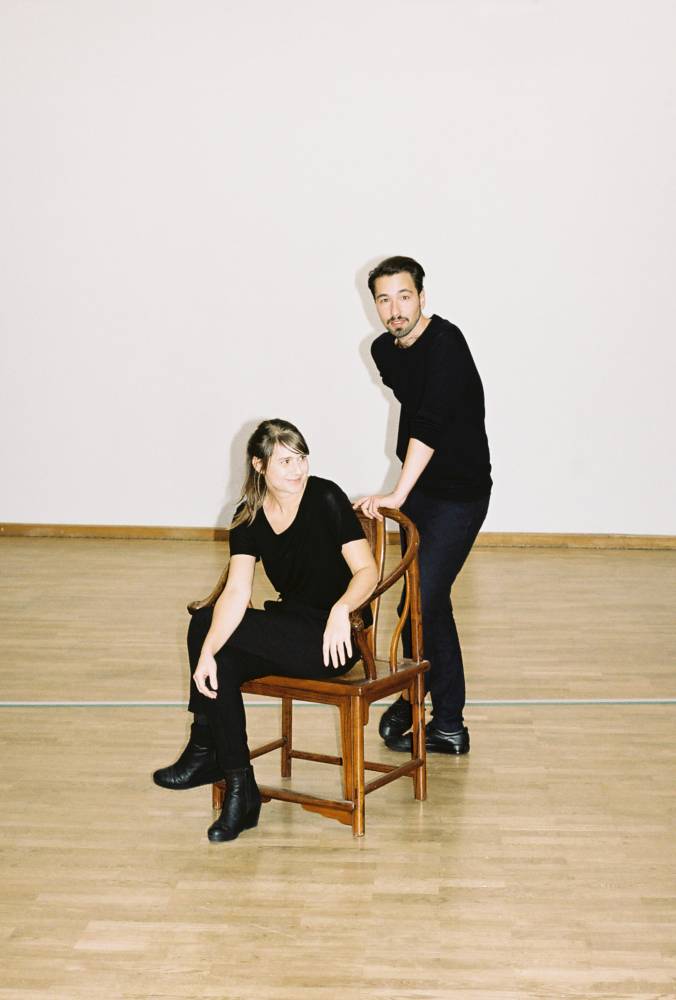