Pushing the boundaries of the 3D industry – Dada-Projects

Dada-Projects believes in an alternative future for 3D design. As a woman-led studio in a male-dominated industry, Christina Worner wants to advocate for more diversity in the industry to inspire broader change. The studio is always trying to push the boundaries of any 3D tool and experiment beyond the expected. This desire to make a difference and her love of 3D have given birth to Dada-Projects.

Tell us more about your background and how did you approach your first projects?

I started off my career from a very traditional graphic design background however, during my masters in Visual Communication where I studied at the Royal College of Art in London, I began to experiment more and more with 3D software, which is where I eventually found my passion for elevating 2D posters into three dimensions. After graduating from RCA I set out to work for Metahaven in Amsterdam, where I gained more experience in book/poster and motion design but I still had that lingering interest in 3D creative outcomes.

What stemmed my excitement for working with Cinema 4D was around testing possibilities, learning the technicalities (it was certainly a challenge) and I often posted this experimental journey on my social media channels which eventually lead to my first freelance gigs at larger companies such as Builders Club and The Mill.

My first official commercial project was merging 2D photos of an Adidas sneaker into a colourful 3D motion environment.

Could you describe the steps of switching from freelance to an all-round studio launch? The more endeavors, the greater the urge to expand or what prompted you to set up your own creative company?

During my freelance years, I often found that I was the only female 3D artist on the team – there was a distinct lack of women working within the 3D/CGI/VFX space, particularly at the director’s level. The urge to change and question this norm eventually grew with every project, and in the course of time, I knew I wanted to be a part of an industry shift. There were simply not enough women in this space.

Ultimately I decided that I could use my skills in a larger format, where I could test out whether running projects as a director was really what I wanted (and ideally hire more underprivileged artists alongside this). Gradually I transformed my freelance practice into a studio which is where Dada Projects began.

My underlying thought was I could test this out, see how it feels – I could always go back to working as a freelance 3D artist if I kept working with other freelancers under the studio. So far, I’m super happy with the decision I’ve made; I’m learning an incredible amount every day, from managing business and client relationships to general organisation and communication with my teams. I’m really hands-on with the production and the creative side of the projects, so it’s honestly a great challenge!

The studio aims to challenge conventions. Could you expand more on the mission you aim to accomplish with your work?

I feel as though the industry I work in has been so dominated by a type of visual language that feels stark and austere, so with my studio setup, I try to inject a softer energy that feels like a step away from the colder aesthetics. I also feel that by doing so, I can give more femme and non-binary talent further visibility and ultimately, we have responsibility with the images we create to inform change in our industry.

You are a female-led studio, which is a key aspect of your identity. How do you think art players can contribute to increasing the number and visibility of women professionals in the CGI industry?

Trying to fill at least 50% of your team with femme/non-binary or underrepresented talent is always a great chance for these groups to gain industry experience. Many of these groups are often overlooked because they may not have enough experience, but they haven’t been given an opportunity to work on real projects. It’s this disparity that we need to work on.

As a freelancer, I worked in a lot of predominantly male teams and there is an underlying ‘bro’ mentality (or being part of a ‘boys club’) which is really difficult as this creates distance within the team and I often felt out of place. I think if we can as an industry work on being more inclusive and understanding that there is an imbalance, it will obviously improve the disparities that we face.

How would you describe the studying atmosphere regarding promoting the female professionals at the Royal College of Art in London? What do you reckon could be transformed in the core of the art institutions in order to dilute the male-dominated environment?

First and foremost, universities and institutions could benefit from shifting responsibility to the boards and leaders pushing for more diversity and inclusion. There is a lot of change already happening on student and teacher levels, but I feel there could be more engagement from the higher-ups or decision-makers. They are ultimately the ones who can make a real difference – so I feel like it’s our job to put pressure on them.

It’s incredibly necessary to bring femme/non-binary lecturers and professionals who are actively working in the industry to coach, lecture and teach students where they may even encourage them to start their own female-led practices. It’s important to note that I’m not suggesting female ‘exclusive’ work, but at the very least, we need to see more females in leadership roles. We need more diversity at the helm of our industry to inspire wider change. 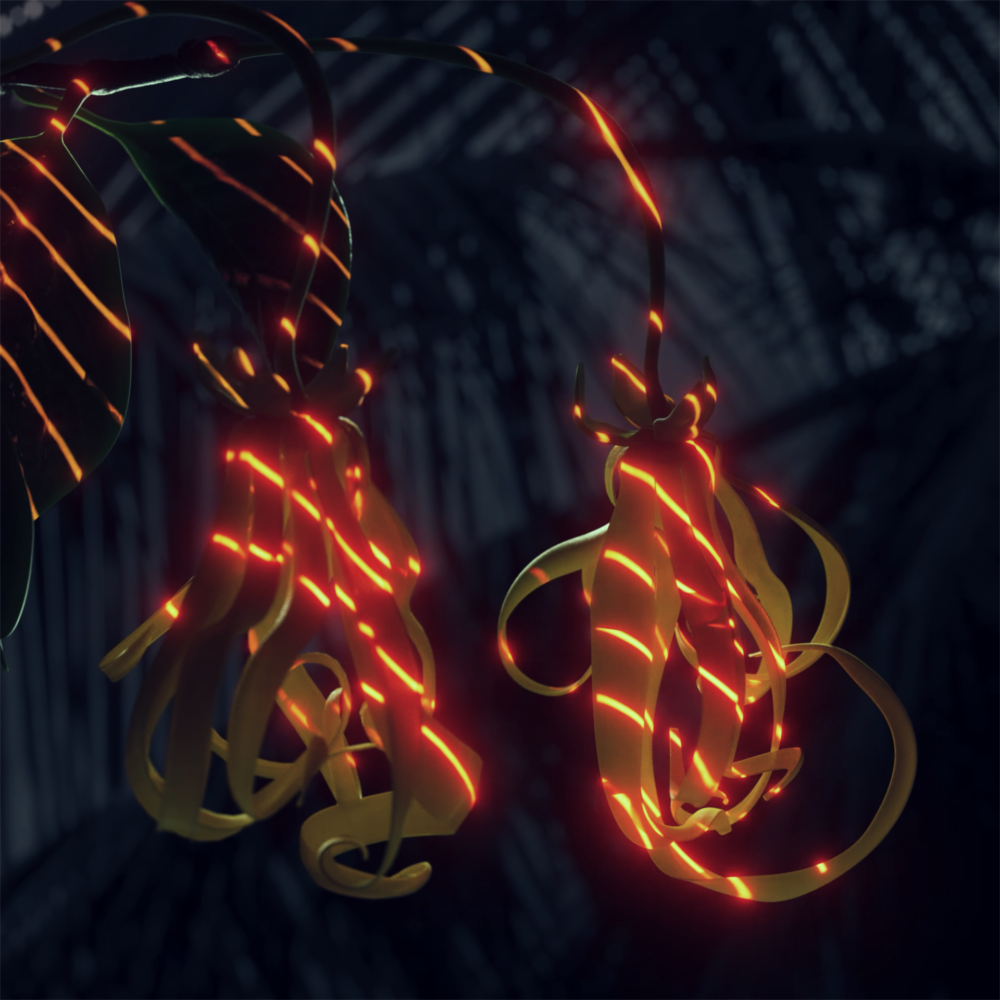 You work at the intersection of 3D, motion, VFX and graphic design. How do you personally see the alternative future of it all?

I see the lines between all disciplines more and more blurring and merging into each other. Photographers these days can use their knowledge of cameras and lighting and apply it to their 3D composition while simultaneously making the image experienceable in VR and so forth. Creative tools become much more accessible and easier to integrate into multiple other programs, facilitating endless possibilities for crafting imagery. I love it when artists stack up plugins and programs and use interconnecting but different workflows to encourage surprising new ways of creating.

What are actually the traditional approaches to 3D animation?

3D software was originally designed to serve the engineering, architectural and animation/VFX design industries. They were most commonly used to simulate real-life physics to mimic, for example, the behaviour and weight of human limbs within earth’s gravity of 9.8m/s2.

What’s interesting is with the rise of software like Cinema 4D or Blender, designers and artists have access to a tool with which they can start to experiment with and bend what is perceived as real. For me, it’s about pushing the boundaries of these tools and experimenting beyond what’s expected.

Fragrant nature with lush greenery and organic surfaces is one of the main distinguishing features of your work. Is there something behind these themes or is it just an aesthetic preference?

I find I can clear my headspace for inspiration when going for hikes and runs in nature – it’s actually my favourite thing to do to fuel creativity. I almost feel that I have this longing for a digital oasis, which could be why we love crafting lush, green environments.

In my artistic practice, I have always been interested in bridging the gap between digital materiality and the digital real – addressing the senses and concerns of touch. What is the line between a digital surface becoming so real that you almost feel you could touch it? How can we use materials to invoke an almost realistic sense of tactility? And although there is a large emphasis on digital materiality in our work, we believe that the beauty of 3D worlds is the ability to bend what we perceive to be real. We often pursue those moments of magical realism and for the viewer to be intrigued by the impossibility of physics or beauty, which can inspire connections on an emotional level. 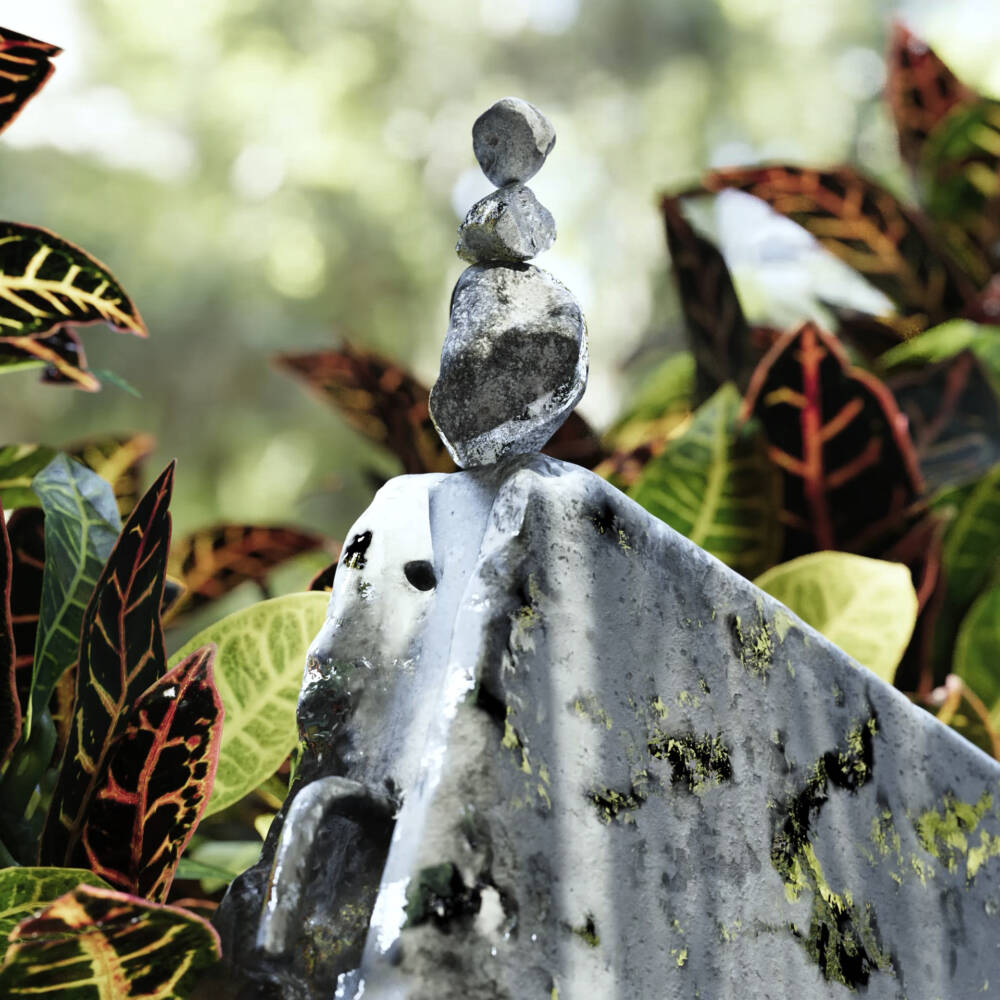 What was the core idea for the production of your collaboration with CALVIN KLEIN AW2021 MOOD FILM?

The brief was to create a series of textural explorations for Calvin Klein’s internal design team to inspire their new AW2021 collection. Our initial idea was to use the possibilities of CGI to challenge the perception of what a piece of fabric is. We created intricate parts of a garment with unique texture treatments, folds, layers and abstract forms that could almost be perceived as static sculptures or melting fabrics that would dissolve into a flowy liquid.

In our initial mood board, we had references of viscous concrete, tinted glass, paint drops, bending chrome, see-through fabric interacting with light and abstract sculptures that would eventually inform the shape of the fabrics.

Tell us please which Cinema 4D tools or features are essential in your work and what is the best about them.

Used and admired in every project – the Mograph tools! Its generators, multiple effectors and shaders allow for procedural animation and are so powerful in cloning/fracturing/randomising/swirling/tracing objects etc.
We also love the Volume Builder and Mesher together with layered displacements through, for example, the Shader Field with different noise patterns. It gives endless possibilities to generate different shapes/forms/structures.
We love how intuitive C4D is and how several routes often lead to the one desired result.

Where do you get your creative insights from and how do you normally organize your research process?

Our research process starts by diving headfirst into developing the context – writing down thoughts and rough ideas on a blank piece of paper. From here, we narrow down into selections and notes, collectively expanding, dissecting and adding to our initial ideas to build the strongest one.

In terms of tools, Miro has helped us create an overview of the ideas, allowing us to structure our thoughts while adding various types of imagery to our words. Based on experience, our clients generally prefer to be talked through the construction of thoughts, almost like a presentation but in a more organic way. We usually find the best references from the platform Are.na which has allowed us to scroll infinitely through individually curated channels and boards.

And finally, any advice for creatives to keep on pushing forward and pumping up their vision?

Don’t be reluctant to experiment and mix/match with different programs, plugins and workflows; This encourages an unconventional way of working, which usually reveals a process that adapts to your overall visual language and thinking patterns.